Current events have meant that my work place is now my home office, frustratingly this is also where I sleep. On one hand this has resulted in a very short commute, but on the other hand it does mean that I am living in close quarters with the computers I use for experiments, on the third hand (where did that come from?) it means that I get to have a testbed in the room where I keep my bed.

Of course this raises the serious question, if I write tests from my bed, which bed is the testbed? Unfortunately I only did one year of philosophy and so others will have to offer answers to this grand question. 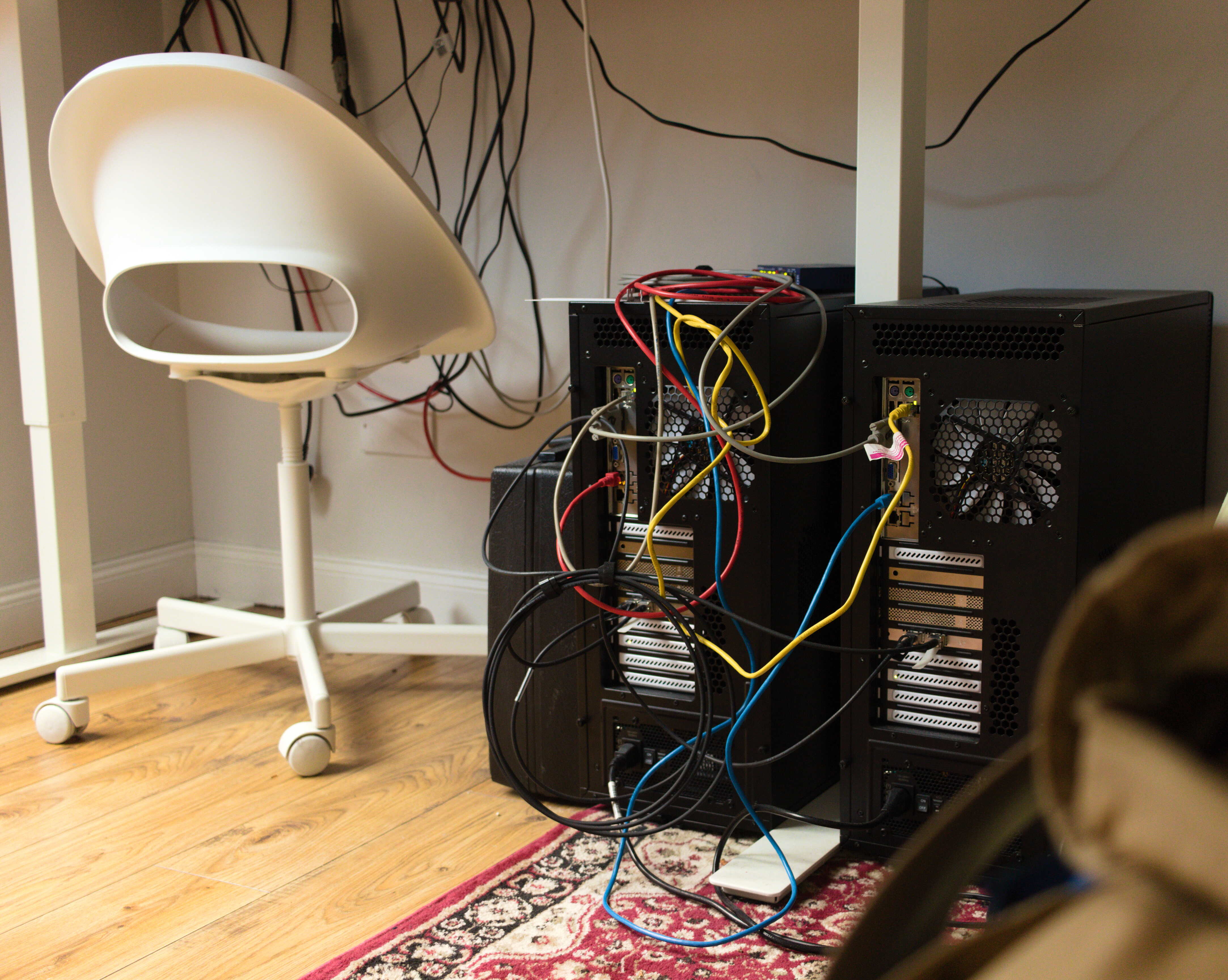 I am in the unusual (for me) situation of needing to (well getting do, I love perf) do network performance tests on real hardware, thankfully my friend Tony was able to lend me two machines from his Bioinformatics cluster to play with for a couple of months.

This testbed exists to answer questions of the form:

"How does stock Ubuntu compare to FreeBSD?"

For these tests to be as fair as possible I need to have as identical hardware for the tests as possible. Tony enabled this by giving machines built out to the same spec, annoyingly his target wasn't "push packets as fast as possible", but was instead "give a reasonable mix of a ton of storage and compute to look at DNA sequences. Anything weird in these computers is clearly his fault and we are very greatful to get to experience them.

A dmesg from one of the boxes is here , but roughly they are:

On top of that I added a pair of dual port 10GbE interfaces I found 'lying' around the labs. One is an Intel X520 82599ES and the other is a Mellanox ConnectX-3 Pro. These interfaces don't match and have different performance characteristics, this is fine for setting up the experiments, but I am going to replace them with a matched pair of single Interface 10Gb adapters for 'production' experiments..

My normal method for evaluating if a machine is fast is to build FreeBSD, they managed a buildworld buildkernel in a respectable 58 minutes.

The two boxes are named with the suffixes '-left' and '-right' with the running OS setting the prefix, so we have freebsd-left, freebsd-right, ubuntu-left and ubuntu-right.

The machines have 3 network interfaces on the mother board, Dual Gigabit Intel Ethernet and an interface for IPMI. On each, one interface and the IPMI are connected to a switch which is in turn connected to the switch in the wireless router that bridges to the WiFi in my house. This setup is a little complicated, but because there isn't ethernet run up to my bedroom WiFi is the only sensible way to connect to the Internet. I'd much preferred a bit of NAT weirdness compared to having to set up WiFi in testbed machines.

I connected the serial ports on '-left' and '-right' to my control host, which is in the same switch domain as the hosts. I configured the SuperMicro motherboard to send the bios to the serial port.

I am really not using IPMI for all its abilities and instead it is a fancy remote power button I can press from the control host:

The serial ports are then connected to the control computer with an awesome two headed usb serial cable (I don't know what it is and would buy more if I did). The operating systems on -left and -right are configured to offer consoles over serial so I don't have to worry about breaking the network and locking myself out when I am far away.

On FreeBSD getting serial for loader and the system requires adding config to loader.conf and is documented in the FreeBSD handbook . Look at the bottom where it says "Setting a Faster Serial Port Speed" (I think the rest of the stuff on the page is out of date and rebuilding with a custom config is no longer required):

This configures loader to use both the video console and the serial console, tells it to use serial and sets the serial to the baud rate '115200' from the slow default of 9600. This baud rate matches between FreeBSD, Ubuntu and the BIOS so I don't have to reconfigure my serial terminal.

Getty (the thing that gives you login prompts) on FreeBSD is configured as 'onifconsole', so no further config is required. You can check this in /etc/ttys :

Getting Serial for GRUB on Ubuntu (in 2021) requires adding the to /etc/default/grub.d and rebuilding the config file with update-grub , this isn't really documented, but information can be found in the grub manual and in a selection of blogposts . For grub serial we need to add:

I am pretty sure the grub.d that ships with ubuntu is out of date with the actual file, when I rebuilt the menu timeout broke, it went from the default 10 seconds to the 0 seconds in the grub.d that I edited. I didn't care enough to file a bug report, this was a lot of faff.

To get console message from the Linux kernel you need to change the flags passed to the kernel when it is booted, you can do this too from grub.d :

To configure systemd to use a console you need to create a services file and it will handle the magic for you. This is documented on the Ubuntu wiki, but everything there is wrong. Instead the systemd versions are available in blog posts you can find online. I found the best results following documentation for a different distro targeting the Raspberry Pi 3 .

You should now have a working getty on serial, but I think you then need to kick something else, I could only get this to work by rebooting.

To do comparisons I need to be able to boot both Operating Systems and manage them remotely. Dual boot of some sort means that I can dig into differences on the two the platforms quickly and get answers from the running systems.

Dual booting the machines turned out to be a lot harder than I expected. When I got the bios output working on serial I thought I was on to a winner, but that pesky SATA controller doesn't play well with the BIOS boot menu. Only the first drive in the SATA controller pair appears in the boot selector leaving me plumb out of luck.

After installing FreeBSD to the second SSD in the SATA controller. I got messages about a FreeBSD install being detected when I ran update-grub . I think these were just for fun though, I didn't get any new menu entries when I test rebooted. I installed FreeBSD by pulling the drive I installed Ubuntu to, booting a FreeBSD USB installer and installing to the only drive (thanks hot swap bay!).

Configuring grub to boot FreeBSD requires adding an entry to one of the extra config files. Internet searching suggested /etc/grub.d/40_custom which I filled out with:

A Unix StackExchange Answer helped me figure out the rough grub commands to use and I tried them out on the grub command line (press 'c' from the menu).

The final grub config looks like this ( notice that default grub is friendly and doesn't beep by default ), with above /etc/grub.d/40_custom :

Before running more enjoyable experiments it is a requirement to get baseline measurements for what the systems can do. I think I need a bit more of a test framework for network performance tests, I want to sample memory usage, CPU usage and get flame graphs for tests, but for starters it is good to get raw iperf3 numbers.

For each configuration, I ran forward and backward iperf3 tests with UDP and TCP. I let iperf3 run in its default 10 seconds measurement mode, for UDP I requested it try infinite bandwidth (-b 0).

For each case I ran iperf3 as a server on *-right and the client on *-left .

Remember for these that by default the client iperf3 process sends and the server receives, this is swapped with the -R flag.

We run baselines so we can understand what future measurements show. Care has to be take that things are actually fair.

FreeBSD -> FreeBSD on the same hardware is a fair test, but it isn't what we have here. When we compare the forward and reverse modes for the iperf3 measurement we see that when the freebsd-left is the sender for TCP we get a much lower through put than when freebsd-right is the sender. My guess is that this is the difference between the offload engines in the Intel and Mellanox cards.

FreeBSD -> FreeBSD for UDP has interesting results. freebsd-left with the Mellanox card is able to sink more packets into the network than freebsd-right with Intel. Annoyingly these are opposite to the TCP results, where freebsd-right can send more.

This might already be highlighting an interesting place to dig, and it is where I would look next, IF I were comparing network interfaces.

Next up Ubuntu -> Ubuntu. When looking at later measurements we need an idea of where changes come from isolating out variables is a good thing to do.

Again with the TCP tests we see a difference in performance between the two systems, for Ubuntu -> Ubuntu it is approximately 1.2 Gbit/s, whereas for FreeBSD it is around 1.5Gbit/s, but FreeBSD has a lower baseline for comparison.

Next up for UDP with Ubuntu -> Ubuntu we see something really weird, for the ubuntu-left sender and the ubuntu-right sender the packets we try to send are much lower than the FreeBSD hosts. This correlates with lower overall throughput in both tests, but almost half the performance for ubuntu-right looks really weird.

I have a hunch that the lower sending rate is related to better pacing interactions between iperf3 and the Linux kernel. I have no idea why the received rate is so low for ubuntu-right .

Finally we get to run it all again with both operating systems in play. If everything was optimal (and we therefore had no work to do) there would be no difference in their performance, but we already know that this isn't true.

Running the tests with differing operating systems gives us an opportunity to see if the receiver side of the test has an impact (rather than just the sender). We can do this by pair the faster side with the slower side.

For now though, I think the different network cards are introducing too much variation between the systems. The numbers differ here and that on its own is quite interesting, but there seem to be too many choices for why. I find the Ubuntu -> Ubuntu reverse test halving the rate very suspicious and want to run the tests again.

The variation in the network cards is actually too much for me, I think it is a red flag in the measurements and would only encourage stupid review comments. This annoyed me enough that I bought a pair of Single Port Mellanox ConnectX-3 EN PCIe 10GbE to evaluate before running any meaningful experiments.

These systems are up and running, even with the questions that the baselines raised they are functional enough to start developing the interesting parts of the experiments and writing enough automation glue to rule out me making mistakes. I can then return, rerun the automated experiments and get better numbers.